Confidence and Communication for the Trail Ride

This time of year equine enthusiasts are excited to take advantage of the good weather and to enjoy the amazing scenery while riding in nature. One of the many emotional draws towards the freedom of riding is to escape the stresses and realities of jobs, family and daily responsibilities... Because of this draw, folks tend to approach riding trails as a time for relaxation, which in turn can cause them to unintentionally offer passive, after-the-fact communication with their horse.

“Passenger” style riding can appear successful during uneventful circumstances. The “wait-and-see” approach also is used in a variety of scenarios when the rider realizes the horse might be concerned with something. Folks quickly realize that their lack of communication and inability to influence their horse’s behavior under stress causes them to feel at the “mercy” of how ever their horse chooses to respond to a situation.

Between inconsistent terrains, unexpected wildlife encounters, herd behavior among multiple horses on a ride, there is a lot for both the human and horse to mentally process. As much effort and energy goes towards logistics in finding new riding trails and planning adventures with friends, the reality is the least amount of time is often spent on what I consider the most important part of the equation- preparing the horse for a quality, “uneventful” ride by building a solid foundation.

Preparing for riding out is not a matter of desensitizing a horse or practicing riding past scary objects multiple times. The old “wet saddle blankets” theory I agree with to a certain degree; if there is quality conversation during those long trail rides, they add to a horse’s education and build his confidence. If instead each ride is making the horse feel more concerned, the increased frequency/length of ride will only add to the horse’s “spookiness” or reactivity.

A horse’s natural defense is to run when unsure, but if he offers this response, there is usually a “fight” with the rider, teaching the horse that every time he feels fear, he gets critiqued. What if instead we taught the horse the unnatural response that when he is unsure, to physically pause, and mentally check in with the rider, and to willingly hear the rider's instructions as to how to handle/navigate the situation?

This approach is not an easy answer, nor a quick fix, and counters the idea that the primary focus of trail riding is social hour for the human. Tolerating mediocre proficiency in the basics such as steering, brakes, and using a gas pedal that often “sticks,” is not polite nor supportive to the horse, and will add to any insecurity he may have. Rather than feeling like we survived an unexpected moment, if we have effective tools to communicate, we can use it to build our horse’s confidence, decreasing the chance of injury and increasing the horse’s curiosity every time something new occurs out on the trail.

The ideal response to an aid is a soft and immediate “try” from the horse. Often a rider’s aid is received as a critical attempt at blocking a horse’s thought or focus, and creates defensiveness in the horse. His mental stress is reflected in excessive physical movement and dramatic behaviors.

While in a safe environment perhaps take a moment and assess the current effectiveness of your aids and communication with your horse. On a “boring” day, what is the willingness in which your horse participates? Does he present himself to be caught (or run away), is there lightness on the lead rope (or dragging- indicators as to how he’ll respond to rein pressure), is he mentally and physically quiet while groomed and tacked up (or wiggly, pawing, fussing, chewing, fidgeting), can he stand when mounted (without being contained by the reins), is there sensitivity (or hypersensitivity) towards the rider’s seat and leg, is there mental willingness to hear the rider’s opinions during a ride, does he try something once and then just quit if asked again?

What if our standard was happy horses don’t exaggerate an obstacle like jumping six feet over the six inch stream, don’t jig when asked to adapt their energy level to the slower horse in the group, don’t paw if left tied unattended for a few moments, are able to stand still quietly, can ride at the front, middle or rear of the group, are willing to leave the group and ride off by themselves, or anything else we might need to ask of them for the sake of practical and safety purposes?

By supplementing trail rides with short, incremental, quality conversations, the horse could begin to recognize how to mentally and physically “stay” with their rider, without feeling contained. Tasks or obstacles can be a tool for teaching a horse to think through a scenario, but presenting one isn’t about the physical accomplishment of the task, rather the quality of the conversation that occurs to complete the task with slow, intentional, relaxed movement. If the horse rushes through the task, even though he may have complied with what was asked of him, it made him defensive, and then task would no longer be a tool. Slowing down the anticipation that caused the rushing, presenting a task in pieces, allowing the horse the time to think, search and try to address the task with quality, builds the confidence he’ll need for the trail.

Sometimes in order to achieve the most quality, we have to slow down and perhaps fill some “holes” in our partnership with the horse. Rather than feeling like riding out translates into chaos and hoping to survive the ride moments, the more specific and intentional we are in what we ask of our horse, the timing of how we ask it, and the sensitivity in how we use our aids to communicate, will influence our horse’s physical behaviors and mental attitude towards us while experiencing the real world.

Could you and your horse benefit from a REMOTE COACHING session with Sam? Click HERE

Posted by SamanthaHarvey No comments: 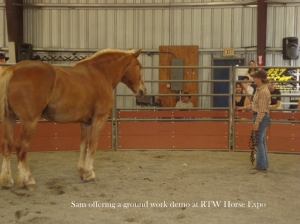 Do you have a "spooky/overreactive/hypersensitive/dramatic/flamboyant/neurotic/destructive" horse? You might want read my following thoughts I shared with a client after her older horse arrived for an assessment:

We had a good first week. The major underlining issue is that your horse is fearful, which creates dramatic and defensive behavior.

How ever he initially learned added with whatever the human experiences afterwards were, has taught him to be "contained" no matter how worried he is, until the moment he cannot "handle" what is being asked and becomes super chaotic in his fleeing movement.

Basically he can never let down and relax due to the anticipation of what might be asked of him next, and is so consumed with being on high alert, that he literally cannot see or acknowledge the world around him. The moment he finally does notice things, it all is too overwhelming and he wants to flee from it.

The cresty, over bent kink in his neck, his dramatic sewing machine like steps, his constant excessive movement- like taking an extra four steps in order to be able to stop and not fall over, his overreaction/hypersensitivity to spatial pressure/physical pressure of the lead rope, etc. are all signs of his stress and are his coping mechanisms. But he's not coping very well.

So the conversation between him and I has been to physically slow down, so that he can literally start to think, then move. The real goal is that he can finally let down and relax and just be present, happily waiting for what I might ask.

It is near impossible for him to look where he is going before he offers movement; this often comes from conditioning a horse to stare at the human all the time. But when we ride, we can't have a horse who is always trying to turn around and stare at us. For him to initially roll both eyeballs towards where he was about to move was mind blowing.

For him to first think, then move perhaps two or three steps and halt, was also very difficult. He offers 0-60 in his reactions all the time. None of his behaviors are out of resistance or defiance, it solely is based on fear.

He could not rationalize that the constant containment or flee wasn't working. So I broke everything that I asked of him into very, very, very small pieces. First look and think, then move with a specific energy, then halt and mentally check in with me. Breathe, chew, relax, sigh.

My goal has been that he can stay mentally present, breathe at a normal rate, let the constant worry peaks above his eyes down, relax his jaw and lips which he holds in a constant tightness due to stress, and lengthen his neck into a "normal" position. None of this is actually about his physical appearance, but rather the physical posturing tells you what the emotions and mental status is. We're aiming for boring.

Whether I worked him loose or on the lead, we needed to change how he felt about pressure- his response in getting taller in his posture and to hyperventilate was not making him feel better. He has now started to learn how to gently soften to pressure- this is a hugely important concept- if he's that defensive towards a lead rope, what happens when you go to sit on him or use reins?

Just touching him, moving around him, he was on guard. Showing him that just because I moved, didn't mean he had to. He acts if he's been reprimanded multiple times for getting something wrong, or just a whole lot of "driving" with pressure has totally overwhelmed him mentally. So we're doing a "re-boot."

Pressure needs to be seen as a positive support and a tool, otherwise it is an ineffective aid. He also has to believe my aids the first time I ask, rather than do nothing at all or overreacting. I noticed as I walked by his side with my hand touch him where your lower leg would lie if you were sitting on him, he got super swishy with his tail- more defensiveness. If he was that bothered by my hand lightly touching him, I can only imagine how he feels about real leg pressure.

Each day is happier, less defensiveness and less flamboyant. He is realizing every time he tries, all pressure goes away, and he feels better.

This encourages him to keep trying, and "meet me" in the middle.
Experimenting with familiar things like lining up with the mounting block- just to see how he felt, he must have grown a foot taller. It isn't about the block, but rather the trigger the block creates, about the potential upcoming ride. So every time he shows concern- we have to divert from whatever we're doing, and address him until he can LET IT GO. Which is very hard for him. But helping him though bothersome scenarios, rather than critiquing him, builds his confidence to try.

He's very sweet and really does want to feel better, and let down, he just couldn't help change his own behaviors.

Need more ideas for your own horse or scenario? Find out about Sam's Remote Coaching services.  Click HERE
Posted by SamanthaHarvey No comments: