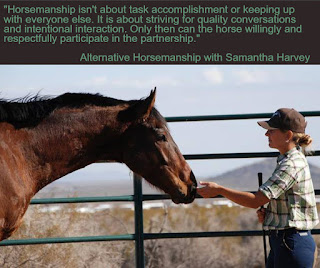 Samantha Harvey's three decades of equine activities include Three Day Eventing (riding under Australian & German Olympic while based in Europe), apprenticing under three-time World Cup Grand Prix Jumper rider/judge, working with nationally recognized horsemanship mentors, apprenticing under a US international Dressage Grand Prix rider/representative/judge, participating in racehorse track prep, honing skills on private cattle ranches, starting colts and finishing horses throughout the USA, and having participated in clinics with a range of international instructors and more. Sam is also an alumna of The United States Pony Club as a participant, instructor, and Joint DC.

Sam trained and cliniced with numerous instructors of various backgrounds. She experienced all aspects of Three Day Eventing; from the competitor's perspective, as a groom, to the rigorous training, studied course designing, and as a crew member of facilities hosting competitions. She was surrounded by international caliber competitors, learned from national and international trainers, chef d' equipes, Olympians, and top coaches.

Her initial exposure and equestrian education were fixated on task accomplishment; Sam realized this was creating a lack of consideration for both the horse and rider's mental, emotional, and physical well-being. For Samantha Harvey, this was a crucial missing key to the "big picture." She realized the more advancement she made with the horses, the more she was surrounded by folks who had an "at all cost" mentality. The behind-closed-doors practices had horses becoming pawns and paying the ultimate price in both mental and physical breakdowns. The constant politics, sourcing sponsorship, and the continuing financial pressures took precedent over the perspective of many "successful" riders. In Sam's experience, she realized the commitment to their success had diminished any enjoyment and true partnership with their horses as they attempted to commit to unrelenting goals.

Crushed to realize the world she had immersed herself in would not lead to a mentally and emotionally satisfying experience for neither her horses nor herself, she left the sport.

Years later she was reacquainted with horses through the United States Pony Club as a trainer and District Commissioner. She began to teach and ride again.

Troubled horses kept seeming to "find" their way to her. Realizing she needed to learn more, she reunited with one of the finest horsemen she'd ever met. This time, she was mentally available to appreciate his wisdom and insight. He helped her re-evaluate the foundation and approach with horses.

Though for many years she had survived riding crazy or unpredictable horses, she now had to re-think everything she thought she knew.

The decades following her drastic shift in mental focus and now offering an empathetic perspective when working with horses also inspired her to help equine enthusiasts learn, interpret, and build empowering horse and human partnerships worldwide.

Visit her VIDEO CATALOGUE for free and paid horsemanship coaching and learning.