Physically: A shrinking of the horse's top line; starting with the ears becoming rigid and angled slightly back, the length of the neck shortening with a tension or bulge in the neck muscles, the back becoming dropped or hollowed towards the ground, the muscles along the rib cage parallel to the ground will bulge out with tension, and the hindquarters are making chaotic, short, choppy, upright steps- think like the movement of needle in a sewing machine, with more energy seemingly up and down, versus powerful and pushing forward.
Mentally: The horse is lacking a soft, confident "forward thinking" mentality, this stems from him being defensive towards whatever is being asked of him by the human. So the physical shrinking away from the pressure is a reflection of his mental state.
How to address it: First there needs to be an assessment as to how early his concern appeared, even if he wasn't at his peak resistance. Most folks label a lack of "forward" in the horse with a human emotion, such as "he's lazy," or "he's being stubborn." But if we learned to first respond with empathy, by translating his physical unwanted behavior as his brain asking for help. He is moving in a defensive manner because he is unsure. So where did he start to feel that? What did we begin to ask of him that caused concern, insecurity, fear, or was unclear? Then how did we initially address it? Did we just "add gas" and make him move more? This unfortunately is the most common response and does nothing to improve the softness in the horse's brain or body.
Until we "play detective" and start to learn and BELIEVE what initial triggers are causing the horse to become unsure or concerned in his thoughts, by trying to "make" the horse move with more quality but not addressing his mental concern, just offers critique of his behavior, a symptom, rather than addressing the root cause, his mental concern.
The more his brain is willing and unconcerned, the more quality his gait and movement will be. THEN you can work on refining the bend, the size of step, etc. because your horse is available for a conversation. 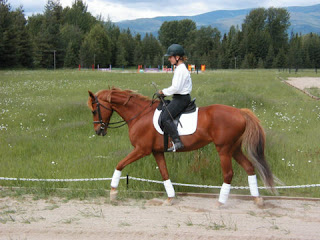 Attached Picture: This is me riding an older "trained' mare. Practice assessing the picture, starting at the nose and working your way towards her rear. You'll see each of the behaviors I've described previously about the accordion effect.
And yet for a lot of folks, at the initial glance, this may look "pretty" and "light" with my drooping rein, but that is really avoidance of pressure and a lack of coming through in her back to actually offer quality movement.
Posted by SamanthaHarvey at Tuesday, April 30, 2019 No comments:

Being Hopeful in our Riding leading to Unwanted Horse Behaviors

#MondayMindfulness
Being Hopeful
Hopefulness. Waiting and Seeing. Reactive Riding. Taking the "try" and willingness out of your horse.
What do all of the above have in common? They are a domino effect that occurs in the riding world far too often. Let me explain.
Each of the following three scenarios are acts of "Hopefulness" by riders:
Have you ever experienced or witnessed someone riding down the trail and seen something "scary" before your horse did? What did you do? A common response is the rider will hold their breath as their horse gets closer to the scary item, sitting very still in the saddle, and perhaps asking their horse to look the opposite way from the item as they "sneak by." Then they wait and are silently hoping their horse won't have a melt down as they pass by. Afterwards they let out a "sigh of relief" that nothing dramatic had happened.
How about the horse who was inconsistent about his willingness to load in the trailer. After he was caught as he was walked to the trailer the handler is chanting in hushed tones under their breath a message of hope "that today the horse would load willingly and not have it turn into the 5 hour fiasco like it had last time."
What about as you watched (or experienced) someone approaching a jump, half way through their barrel pattern or was building a loop while waiting in the roping box... What was going through your head (or what appeared theirs based on their facial expression) before the horse was asked to perform? And then what was the reaction from the rider AFTER the round? "I wasn't sure what he was gonna do..." "Whew, glad that's over with..." "Well THAT was a little scary..." "I hope that doesn't happen again..."
Many equine enthusiasts talk about communication between horses and their owners. This in itself is a whole other topic for another entry. What I want to mention is what about the LACK of communication between the rider/handler and the horse, the silence, or the "hopefulness" from the human.
All too often I see horses that have been deemed a "bad" or "ill behaved" horse. When I actually watch the interaction between the rider/handler and the horse often I find myself staring at a horse with a totally blank expression or confused look on his face due to "silence" from his rider/handler.
Then when the horse starts showing signs of worry, concern, stress, or other dramatic behavior, because he doesn't know what is gong on, he is punished or reprimanded for it. Instead the rider/handler ought to be having a CONVERSATION with the horse. The horse needs to be told AHEAD of time what is going to be asked of him. All too often the person winds up being "hopeful" and after-the-fact in their communication. When the horse offers a physical action the person doesn't want, only then does person address him. By now, it's too late. The rider is REACTING after the event. This is what I call REACTIVE RIDING.
When people sit down in that saddle their brain tends to focus solely on themselves. Instead if they treated their horse like they were "on the same team" and told the horse what the PLAN was ahead of time, the horse would have a better chance of offering the desired response to the handler or rider. BUT in order to have a plan, one must be THINKING (again, another blog topic) AHEAD of time of what, how and when they will ask something of the horse.
People tend to HOPE their horse will figure out what is going to be asked of them without ever offering any physical, spatial or verbal communication. Then when the horse doesn't respond as the handler/rider had wanted, the horse is reprimanded but never shown what the desired response had been. So the horse continues to stumble mentally and emotional, therefor physically, due to his continual existence in the "gray" area when interacting with a human. Eventually the feeling that he "just can't get it right" overwhelms him and he mentally checks out. Once he's mentally gone, there's no chance he'll physically comply.
When a horse reaches this point, people term them as being "naughty," lazy," "disrespectful, 'bad," etc., when in fact this is not the case at all. After trying all of his "options" if there is no communication from the handler/rider, the horse eventually gives up trying to figure out what it is that the person is asking of them. This is how people take the "try" and CURIOSITY (again, another blog topic) out of their horse.
In summary, by being HOPEFUL you will end up WAITING AND SEEING how your horse is going to respond in the future. This means you are now RIDING REACTIVITY which causes your horse to be operating in the "gray" area which will eventually TAKE THE TRY out of him and cause much stress to both of you.
So the next time you head out to visit with your four legged friend, please keep this in mind:
If you don't tell your horse specific, thoughtful instruction, your horse's cannot possible "get it right."

Until Next Time...
Posted by SamanthaHarvey at Monday, April 29, 2019 No comments: