Horses: Pressure and Reviewing the Release

As with everything much left to interpretation when it comes to terminology in association with horses. I try to be clear and precise in the words that I'm offering, but there still can be a gray area in the human student's understanding. 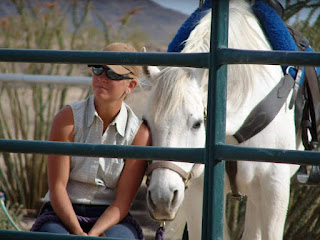 Dear Sam: Horse Help Horsemanship Series *Car crash vs. Jigging or Rushing Horse Too many folks struggle with fixating on the peak moment of the horse's dress or unwanted behavior rather than addressing the root cause. Learn where you might be missing the initial indicators as to the future potential bolt, jigging, rushing, or other unwanted dramatic behavior in the horse. Be sure to subscribe to the Alternative Horsemanship YouTube channel to not miss new weekly episodes. #alternativeHorsemanship #RemoteHorseCoach #dearsamseries In-person Learning www.learnhorses.com Online Horse Courses and Distance Learning https://remotehorsecoach.uscreen.io
Posted by SamanthaHarvey No comments:

Horse Tips with Pippin: Willingness to Adapt at the Mounting Block

#tipswithpippin This rescue Haflinger has an unknown past. As I've been re-educating this initially defensive, highly reactive, and distrustful horse, I want to share moments of value that affect all that follows in building his trust, try, and willingness.
Posted by SamanthaHarvey No comments:

Dear Sam: Horse Help Horsemanship Series *Getting Hurt with Horses So many human/horse accidents, fear, and trauma can be avoided by trusting yourself to not just do "what everyone else is doing." Sam shares her thoughts on when not to trust the equine professional in order to keep you and your horse safe. Subscribe to the Alternative Horsemanship YouTube channel for weekly episodes and other horse behavior and learning videos.
Posted by SamanthaHarvey No comments:

Those words had no value to me all the years I interacted with the horse unintentionally offering continuous tension- on the lead rope, on the rein, in my leg, etc.  There was never any true release of pressure towards the horse (other than during a jump.) 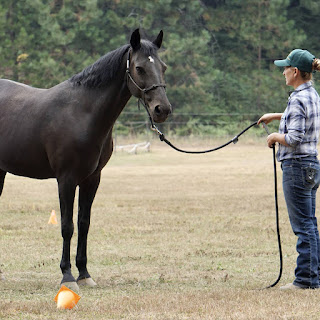 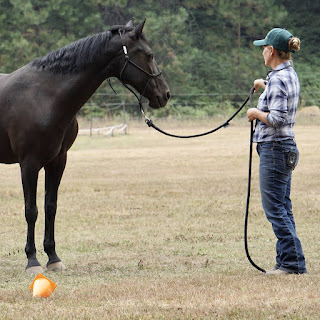 Tacking up the Horse with Quality

Most people never consider how the horse responds to just the sight of tack or notice if there are Quality Conversations while doing so. 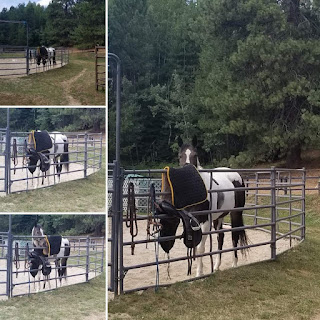 Each part of the interaction influences the mental reasonableness and physical softness that follows.

While the norm (often out of convenience) is to tie the horse while tacking, the degree of bother or concern a horse may have while doing so frequently is suppressed.

I suggest practicing tacking the horse without tying him. The goal is not about getting tack on.

It is an Opportunity to notice how your horse feels about standing while you are moving around him.

It also allows you to observe for things such as:

Does he mentally check out as you go to groom?

Does he pin his ears, shake his head, swish is tail, or display any other defensive behavior as you groom?

Does he step away or backwards when you swing the pad or saddle on?

Does he constantly avoid the tacking by diving down for grass?

When you tighten the cinch or girth does he swing his head at you, try to walk off, back away, etc.?

Does he act differently if you tack from one side versus another?

If you change the location of where your horse is as you tack does he suddenly act differently?

None of this is about the unwanted behaviors. Instead the undesired responses could be an indicator as to potential pain issues, holes in the foundation of the equine partnership, reflection of concern towards the upcoming ride, etc.

If the ride is prefaced with an experience (in this case tacking up) causing the horse to be in a state of anticipation, defensiveness, avoidance, flee, etc. how might that influence everything asked of him during the ride?

There is never a convenient time to address the horse's concerns, but the longer you avoid helping him, he is being taught he is own his own. This will cause him to start taking over and dictating how the interaction will go based on the lack of support, or even criticism from the human.

The horse only has so many subtle, reasonable behaviors to display his fear, concern, or anticipation. If you're not addressing it now, then when?

After much preparation in first offering her time, then building trust with this BLM mustang yearling filly with her learning to accept being touched, haltered, and led. Then she was finally ready for her first outing and some time in a different pasture.
Posted by SamanthaHarvey No comments:

Alternative Horsemanship with Samantha Harvey the Remote Horse Coach shares her perspective in an open dialogue in response to the world witnessing the unwanted, dramatic, and dangerous scenario in the Tokyo Olympics involving a horse.
Posted by SamanthaHarvey No comments:

Curiosity in the Young Horse by Alternative Horsemanship with Samantha H...

Meet Blackie He's a two-year-old colt who was born in the wild on a private land reserve designated for this particular group of horses in the early 1900s. His owner went and adopted him after being up here at a clinic and meeting Chloe, (remember the horse I rode the bicycle with?,) a filly born in the same band. Do you remember the video of the colt Montana playing in the water? He's also from the same band. The minds on these horses are pretty incredible... No, he's not a mustang... In the background is not mist or clouds, but rather smoke. Can you see the 6,000' mountains behind the trees? No? Neither can I for the last few weeks. The wildfires are still raging around us...
Posted by SamanthaHarvey No comments: 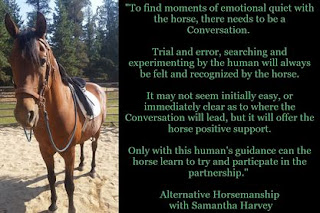 There are openings in the Oakzanita Ranch Alternative Horsemanship with Samantha Harvey winter clinic series.