As I meet a new horse, one of the first things on my "checklist of assessment" is if the horse's brain and body are softly influenced and directable forward, left, right and backward. 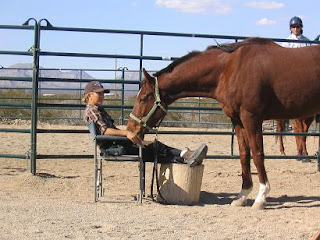 In my initial presentation, I might hold the lead rope with just my thumb and index finger, gently sending energy from the connection point of the lead and halter, towards the horse's chest.

The ideal response is for the horse to soften his jaw, relax his neck muscles, deflate his chest muscles, bend his hocks to prepare to take a step backward. He will lift his back as he steps back, there will be no leaning or pushing forward in his shoulders, neck, or nose. It will be a slow, intentional, thoughtful movement, with consistent, steady breathing on his end.

More often then not, instead folks are amazed at how many horses go rigid or stock still the minute they are asked even just to mentally consider to take a step back. The horse's head goes straight up in the air, the front legs lock up and seem to be pushing straight up towards the sky with the inability to bend at the knee. The horse hollows its back, standing with his hocks spread wide, braced and seemingly locked.

So because frequently maneuvers asked of the horse are seen as singular, non-related, task accomplishments, if people feel resistance or lethargic response in the horse when asking them to back they ADD more pressure. This could be with the tail of their lead rope, it could be with a whip or stick or flag, could be done by adding a stud chain.

And eventually, that approach may work- in terms that the horse will move his feet in a backing movement in order to avoid the amount of pressure used towards or at the front end of his body.

But if you were to asses the quality of steps he finally offered, under that much applied-pressure, you'd probably see the horse carry the same posture as when he was "stuck" at the halt. So the question is, even if his feet moved backward, did his brain ever actually think back? Or was he just avoiding the chaos of pressure being presented in front of him?

Because people are unaware that they can have standards and quality conversations with their horse, and the goal should not be solely trying to get compliant obedience, folks see the physical movement backward and accept it. So, what has this taught the horse? When there is too much pressure- one way to avoid it is to back, and the pressure goes away.

Let's fast forward to maybe an intense group trail ride, riding on the edge of a cliff, a chaotic warm-up arena at a show, anything, anywhere that might cause the horse stress. Let's say that the horse's concern starts to build, and because the rider or handler doesn't have enough effective "tools" in the conversation to address and help the horse, the horse does what is natural when they are unsure, and tries to flee or move quickly forward. But that isn't allowed.

And maybe it is just a one-time scenario, or perhaps after a few situations, it is suggested that the rider changes to a stronger bit, as this will help "control" the fleeing horse. So now when the horse is stressed, concerned, having anxiety building up within him, there is more literal physical pressure being applied to his face or front end- harsher bits, martingales, tie-downs, draw reins, etc. So now the option to "flee forward" is slightly more restricted- so what is the other option that has "worked" in the past to make the human-created pressure go away? To go backward.

Every year I get two to three calls about the horse that "backed off over the cliff," or the one who "backed up and over the arena fencing" or the one who backed so quickly when attempting to be unloaded from a horse trailer that they ripped through the roof of the trailer as they were still tied when fleeing backward. Could it have been prevented? Yes. Was the time to "fix" the quality of the conversation, communication, and meaning with the horse the time of the animal's peak stress? No.

But for some reason, people see it as an inconvenience to refine the conversation, rather feeling more accomplishment when there is a specific task instead. So the horse flying backward is doing what he has been taught to do. He isn't trying to scare you or hurt himself. He is clearly displaying there are holes in the foundation of his education.

Backing should not be used as a reprimand, out of aggression by the human or as a critique by the rider. It is a tool, just as being able to direct the horse's brain and body softly to the left, right and forward.

No matter how long you've had your horse or worked with the one you're currently riding, on a quiet, "boring" day, perhaps take some time to do your own assessment, as if you were riding or handling the horse for the first time. If you find there are areas that need refinement, don't get judgemental as in, "We should already know how to do _______."

Instead, take the feedback from the horse as an honest response that gives you more information as to what your "job" or focus should be in helping your horse better understand your communication without defensiveness. This will add an effective tool to your toolbox, and allow you to offer increased support and guidance to your horse and the day he needs it.

Find out how Alternative Horsemanship with Samantha Harvey Remote Horse Coaching can help improve the partnership with your horse! Visit the SITE
Posted by SamanthaHarvey at Thursday, October 31, 2019