What is Alternative Horsemanship? 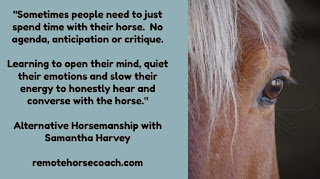 I was recently asked about the "Alternative Horsemanship" and why I use that to describe what I do. So I thought I'd share with the group my answer...
The interpretation of "Alternative" Horsemanship is relative to your current perception and word association... as the human student's awareness and recognition of believing the horse's communication evolve, so does their translation of what Alternative "is."
For those unfamiliar, it can mean the black and white, "something different," than mainstream training approaches. For those learning to have empathy that all of the unwanted behaviors, lack of understanding, or unresponsiveness in the horse are coming from honest feedback from the horse, and the human learns how to offer specific support and guidance in how they communicate rather than just critique to the horse, they are offering an "alternative" approach. For those that are really committed to changing their own patterns, thoughts, and emotional triggers that cloud the quality of interaction with the horse, it is an "alternative" mindset and a proactive way of decision making and "being" that affects much more than just the relationship with the horse.
For most folks, there is an "I want" that prefaces everything with the horse. This often limits them from learning and understanding that the expectation of the "modern-day" horse is often unreasonable as most horses haven't had a quality education, haven't been allowed to socialize, and their world has been "very small." Then you add the even less educated/experienced human asking things totally unnatural of the horse and be "surprised" by all the resistance and dramatic moments, and the person's response is to critique the horse continually. Folks then wonder why the horse doesn't want to participate.
Although I work with colts, re-educating/rehabilitating (mentally) many horses, and the most important aspect is educating their human counterpart to SLOW down and become present. To help a person understand their own body language (intentional or not,) to clarify their intention and TO recognize and believe the horse's feedback- rather than ignore it. Then to learn how to work with the horse to reach the human's desired goals.
But this approach is prioritizing getting a mentally available horse first, then physically asking him to do his job. Most people believe moving the horse's feet will get you his brain, but that doesn't make sense to me. If he's stressed, fearful, and/or concerned, physically asking more might create containment and tolerance in him, and you might get through the moment, but have you taught him for the future? That every time he is bothered, more pressure is added. At some point, too much pressure is built up, and the only option is an explosion.

And that's where the difference in riding abilities comes out, most people are "holding" their horse together, but if a lesser capable rider were mounted, the horse would split in two. My question is why would anyone want to ride like that, and is that really the relationship we want to create with the horse, one of constant containment, or one of building an equine partner willing to search, try, check-in, and be reasonable in how he participates? If he is mentally offering this, he can become physically soft in his behaviors, and the ride becomes a quality experience for both horse and human.
But this approach doesn't offer mainstream quick-fix solutions. It is one of mental and physical commitment... it is a journey.
Sam
Posted by SamanthaHarvey at Wednesday, September 16, 2020