Cause vs the Symptom: Horses that quit or abruptly stop moving forward 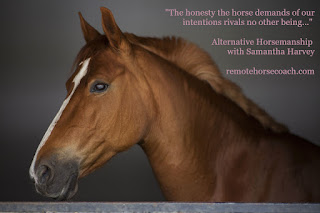 With current world events, I've been doing a lot of Remote Horse Coaching. For folks that have access to their horses, one of the "spring" themes seems to be horses that were going "fine" and then "randomly" or suddenly started stopping, where they abruptly quit moving forward, either when led or ridden.

Keep in mind that nothing is random when a horse does it. You may not know why the horse did it, but very rarely was it not intentional... Including all those times he "accidentally" rubbed your leg on the fence, put you under a low branch while riding, takes just one step away with his hindquarters from the mounting block as soon as you put your foot in the stirrup, or when he walks super slow leaving home and rushes on the return trip, etc.

Every time you see something unwanted in your horse's physical behavior, pause and remind yourself that the horse's body is a reflection of his brain and emotions.

So instead of categorizing the "not moving forward" as the issue, you need to play detective as to what contributors have been adding to the horse's mental and emotional state to where he decides his only "option" is to no longer move forward.

Often this resistance in the horse occurs as the result of him having "asked" for support in the past; perhaps in what initially appeared as unrelated behaviors. When these were displayed and the human responded with a "driving" or "making" him continue to do something, it reconfirmed to the horse that he was "on his own" as to how to handle a scenario.

The initial answer from the human may have appeared to have temporarily "worked," until the day it didn't.

The problem is that the human thought they were fixing the horse's problem because the horse had temporarily quit offering unwanted behavior. But often that original defensiveness has just evolved into another form of unwanted action. So the human never actually fixed the root cause, neither improved the horse's trust nor supported him through his concern. When this cycle happens enough times, the horse is "taught" quitting is the best option.

So how do you fix this? I always suggest playing detective. Folks need to mentally back up and review past activities or scenarios they had asked of the horse prior to the moment of "final resistance." I don't just mean on the day of the horse quitting, but in the weeks prior to the "new" behavior.

Next assess what "tools" and skillsets do you have to help redirect the horse's thought, help him to drain his physical tension; when the fear or concern is diminished it is replaced with curiosity in him. This allows him to participate in a reasonable manner, even in unfamiliar situations.

Then practice refining the Conversation between you and your horse. Prioritize being able to influence and re-direct his thought WITHOUT it feeling like a fight. If you can't do that from the start, before you present a potentially stressful scenario, you're setting yourself up to be "at the mercy" of the horse. Start to prioritize searching for how much support from you does it take the horse to "let go" of his concern. His ability to "hear" you will rapidly diminish if his emotional cup of mental concern is continuously filling every time you interact.

It isn't about getting the horse through/past one imaginary boundary or location, it is about the quality of every conversation between you and the horse that either contributes positively to building a quality partnership or one that drives him into a stressful state and starts to deteriorate his trust of you.
Posted by SamanthaHarvey at Monday, May 04, 2020