Encouraging Curiosity in the Horse as the Training Continues

Curiosity in the Horse 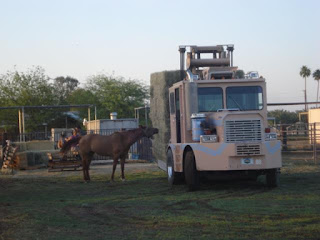 I had a horse... one of those "I didn't mean to acquire him" types... one of those the hoarding breeder got out of control and ran out of money with a bunch of malnourished pregnant mares... one of those orphaned colts as a consequence. I tried to say no... but Pico wound up with me. He was Curious. Not the most confident nor athletic with his clubbed foot, but he sure did keep everyone entertained.
I remember one time a client arrived early to drop off a horse for training at my summer training facility. They have to pull into the enclosed infield. In the afternoons I turn horses out to graze the 10 acres around the arenas in this area. The herd of horses had been at the far end of the field, and neither they nor the client realized where the other was at. So she pulled in, closed the gate, swung open her trailer door, and was getting ready to unload her horse.
While doing so, the herd had galloped over as they took their job seriously as the official Greeting Crew. All except one horse stopped about 50' away from the trailer. Pico, ever the curious horse, decided he would go above and beyond normal welcoming duties, and climbed into the client's trailer to escort the new arrival.
Oh my... I'm watching all this from my porch as I'm rushing to put on my boots and hurry over. So there I am with a new client, and standing outside the trailer telling my horse, "Pico, Get out!" He looked at me, look at the gal, gave her horse a sniff, and slowly unloaded in reverse, one step at a time, pausing after unloading his rear feet, sighed, and unloaded the front ones.  Casually he turned around and walked over to me with an interested look, checking in, and as if he was asking, "What's next?"
The irony was, of course, this new client's horse had given her a lot of trouble trailer loading and here my horse had galloped the field and hopped into an unfamiliar trailer without a second thought. Best "sales pitch" ever as to my approach in working to maintain curiosity and an interest in the horse as their training continues.
Had I ever practiced loading Pico loose? Never. But his physical response to the trailer was a reflection of his mental and emotional state in regard to his experiences with trailer loading. It was such a great example of how training a human offers the horse can be retained without the guidance or direction of the human.
The picture I've shared with this post was captured at our winter base at the time in AZ. They don't deliver hay by the ton, but rather by the dump, and here again, the hay guy arrived early, Pico had been out grazing and thought he'd hit the jackpot as he discovered the horse buffet on wheels.
Posted by SamanthaHarvey at Thursday, May 07, 2020

Email ThisBlogThis!Share to TwitterShare to FacebookShare to Pinterest
Labels: curiosity in the horse