Horsemanship: Perceptions of the Halt 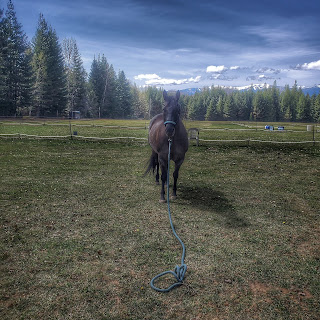 I find most horses asked to stand have a massive degree of containment imposed upon them to prevent them from physically moving.

The horse learns to comply by not physically moving his feet, but often his mind is everywhere except where he's physically at. Then when "allowed" to move, there is a rush or surge in his movement as he flees from the built up pressure creating his containment at the halt.

What if instead we presented the halt to the horse as an Opportunity for him to mentally process, check-in with the human, time to emotionally let down, and a place to physically soften?

By doing so, we have shifted from focusing on physically containing the horse's movement to not only offering him support, but also instilling a fundamentally basic (and unnatural) "tool" to the prey animal.

We have taught the horse if he is unsure, to stop and check-in with the human, rather than instinctively flee.

This type of Conversation can completely shift the horse's response to the Human Interactions.

Posted by SamanthaHarvey at Wednesday, April 28, 2021