Horsemanship: Round Pen Use

There was an article on anti round pen usage... Here is my perspective/response:

I find 95% of folks misuse a round pen, whether under the guise of "exercising" or teaching conditioned responses, such as the lesser of two evils is to turn, face the human and be caught; which is a bullying tactic. 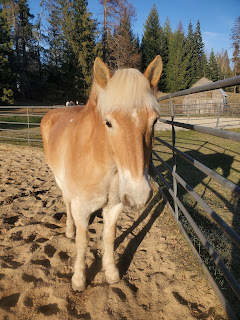 The problem with teaching conditioned responses and patterns is the day you change the routine, you get a fire breathing dragon instead of your docile horse. So what happened?

Most horses learn the pattern in order to get the human to leave them alone. There's not a lot of thought or clarity, it is just a form of "escaping" the pressure created by the human.

The human in turn incorrectly assumes that because the horse is being so "helpful" by automatically doing something they might ask of their horse, that the horse is okay. More times than not, he is not.

For me the round pen allows an opportunity in a safe place where the horse and I can have open two way communication. It is an opportunity to assess if the horse is mentally available to physically participate with me. If any sort of fast movement or continuous movement occurs, there's typically a brainless-ness and flee to it.

Most horses that arrive with "behavioral issues" (which is often a symptom, not the issue) is a direct result of constant mental and emotional stress.

The horse is rarely considered when the human has an agenda. So often the horses are bullied into doing things that really bother them and "all of a sudden" they act dramatic, resistant and dangerous.

No, it wasn't all of a sudden. Most folks do not notice, put value to or address if their horse is asking for help, until the person can no longer ignore the escalating dramatic behavior displayed by the horse.

So as I start a colt, re-educate an older horse or fine tune a finished one, the round pen can be a tool.

Could the same conversation happen while in the pasture, being led or tacked? Yes. It is not about location, shape of fence or teaching a patternized response. It is about a quality Conversation that sets you and your horse up to be successful.

But folks are looking for patterns and conditioned, brainless responses. If the horse is physically and mentally bothered, fearful, insecure or shut down, why wouldn't I want to address that and help him sort out his concerns BEFORE I get on? There's no need to "wait and see," what the ride will be like; if I see he's bothered now, it'll only get worse in the saddle.

Imagine if all these amazing athletic creatures were supported to compete without being in the the continual state of stress and duress, then what might their movement look like?

By not offering a horse TIME to sort through his emotions, rather just attempting to physically exhaust him, but never address what he's bothered about, is setting up the horse to be defensive....

As with everything, something that can be a safe, confidence building and supportive tool based in how it is presented by one person can also be a horrific experience for the horse if someone with ego, time limitations, and ulterior motives uses it...

Posted by SamanthaHarvey at Thursday, April 15, 2021