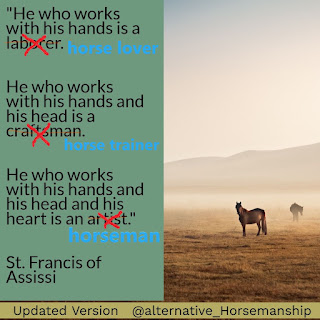 In the past few weeks so many horse people have reached out from all over the world sharing heartfelt (and some gut wrenching) stories of the trials and tribulations of their Horsemanship journey.

For many, the years or decades-long growth and shift in their mental approach when interacting with the horse often isolated them from what once was their supportive equine community.

As one begins to question the foundation and value system in which a certain thought or concept or approach their Horsemanship is based upon, many originally solid beliefs can quickly crumble.

But amongst the debris of scattered, frustrating, and overwhelming emotions, is the Opportunity for change.

Please remind yourself that despite the twisted, steep, and at time monumental "path" with the horse which may seem unclear and convoluted:

Everything is a learning Opportunity, even if it is what not to do in the future.

Every moment of Interaction with the Horse you have a Choice in your thoughts, energy, and intention.

One moment influences the next; if Quality isn't present in the Communication now, then the horse's behavior will reflect that in his Future responses.

Allow yourself Permission to Experiment... without Critique.

Let go of self-induced Urgencies and replace them with Observations.

I'm so thankful for the ability to connect with others who now prioritize the mental, emotionally, and physical well-being of the horse, even when it forces the human to become accountable for all that they unintentionally influenced and responsible in expanding their knowledge and skills.