Eliminating the Hurry to Improve your Horsemanship

In western society, people tend to hurry, and unintentionally carry their chaos into their horsemanship. 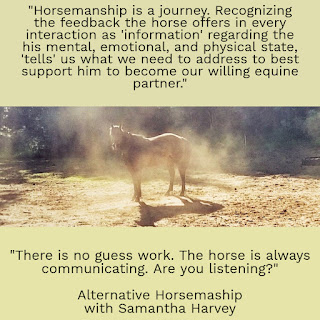 Their self-imposed urgencies of task accomplishment often become the focal point, rather than prioritizing the Quality of Communication with the horse. The general unspoken standard of "if the horse's behavior doesn't scare me, we're still okay," leaves many horses in the gray area during a majority of human interaction. If the horse "mostly" complies, the tendency is to add more to what is being asked of him.
Without effective “tools” (not gadgets, rather how a person communicates with the animal,) the human often winds up at the “mercy” of however the horse responds, creating an all too familiar “surviving” the ride experience. This creates a vicious cycle of anticipation, worry, fear, and insecurity in humans and horses, and is a completely unnecessary element in the partnership.
A first-time clinic participant recently said, "I have to be really clear and think about specifically what I will ask of the horse, and then have to stay focused on what response he offered... every single step!" This is something I hear a lot.
For most people, as they begin to ponder and revisit past scenarios, it triggers quite an emotional rollercoaster as they begin to realize how "abandoned" they've unintentionally left their horse during a majority of the past interactions. They start to piece together how and why the numerous unwanted behaviors gradually started increasing over time. Then they begin to understand what they initially considered as random acts, was actually a reflection of the filling and finally overflowing of the horse's proverbial mental and emotional cup.


The equine's physical behavior reflects his mental and emotional state. If he is ignored, he is "forced" to take over and make decisions to "protect" himself. Most of these decisions leave humans in undesired and potentially dangerous situations.
As a preventative manner, rather than waiting until the horse is at peak stress levels, learn to seize every opportunity to observe and acknowledge the horse's feedback. A great starting place to assess the interaction between you and your horse is during what many equine enthusiasts consider "mundane" interactions.
Perhaps consider and experiment with the following questions below- not as a test of judging the horse as to whether he is "good" or "bad" (there is no such thing)- but in terms of considering his mental availability, adaptability, directability, defensive or avoidant triggers, etc. *If you walk into the pasture/stall does your horse automatically move away from you (fleeing from your spatial pressure)?
*Does he approach nicely but “hover” in your personal space (delegating the pecking order of where you’re at in his herd)?
*If you raise your hands to halter him does he move his head up, away, or “dive” into the halter (defensive, anticipative, disrespectful)?
*When leading him is he sluggish and slow in response, does he try to “hide” behind you as you walk, does it feel like he is “leading” you and rushing, or does he constantly walk with his head cranked over his shoulder with his body bumping into you?
*If you walk past grass or a buddy horse does he try to drag you over to where he wants to go?
*If you ask him to stop moving using the lead rope lightly does he respond slowly, is over-reactive, or completely ignores you?
*If you walk faster or slower does he mimic your energy with his, or does he only offer one speed irrelevant to what you’re asking? *If he is tied does he paw, wiggle, chew on the lead rope, pull back against the rope, or move away from you as you groom/tack him?
*When you mount, does he stand still, walk off before you’re ready, or fidget if asked to stand longer than he wanted?
By taking the time to play with the horse to assess the above, you are slowing down mentally and physically and becoming present. It allows you to "hear" his feedback. This information gives you direction as to what needs to be addressed or if there are "holes" in the foundation of his (and your) education.
It may appear as the "boring" stuff, but the reality is whatever quality or lack of, you experience in communication from the ground, will carry over and diminish more so while sitting in the saddle. Your opinion of, "We've done this so many times before, it shouldn't be a big deal," is irrelevant. What matters is believing the horse. Because if you have "done" something on numerous occasions, and your horse is still troubled by it, it is on YOU to break down and refine the communication until it has value to the HORSE, to help him have a different mental search, emotional calm, and physical softness in response to what is presented.
During every moment of every interaction, you are teaching the horse something about you, whether or not you intend to. More often than not, humans are teaching their horses to be defensive, avoidant, shut down, "nonresponsive," or hyperalert and fixated, because all the subtle times the horse previously communicated their concern, were ignored. For a lot of folks, it is emotionally troubling to "have" to address the horse because of the "I wants" they have prioritized thus far. But as I always say, " If not now, when?"
Posted by SamanthaHarvey