Horse Problems - I want it NOW

I was teaching a session yesterday at a clinic, a new student was filling in a last-minute opening and had been unable to trailer her horse to the facility. She asked to do an unmounted session focusing on her body awareness and aid usage while in the saddle- without the horse. Many horse people would probably balk at the thought of paying to participate in a clinic without a horse. 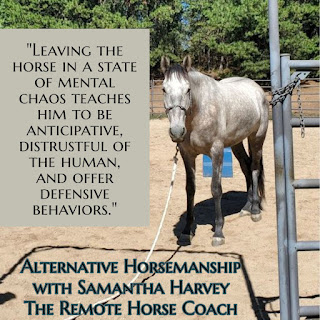 After teaching for 30 years, I would love for people who I meet me for the first time to show up without a horse so that they could raise their awareness and understanding of the biomechanics that often get overlooked because the "goal" is to "accomplish" something with the horse.

So much unintentional communication is offered by many riders (irrelevant of their experience) because they are constantly fixing, fussing, shifting, crooked, gripping, clenching and lack general body awareness when they are in the saddle.

Then add in trying to keep track of the horse's behavior, often taught through methods of strong physical aid usage to "contain" the equine, which causes them even more tension and imbalance, and it easily becomes an overwhelming experience. In response the horse offers unwanted behaviors.

I find when I give answers suggesting slowing down and pausing, allowing for mental clarity in the human first, it allows folks to have an unintentional proverbial and often literal exhale.

I was really thinking about this after the session because it is something that has plagued the horse world the entire time I've been a part of it. There has always been this utmost urgency of reaching a sense of accomplishment. I'm not sure if that comes from the marketing perspective of, "Train with me and you will accomplish X,Y, and Z with your horse," if it's motivated by the competitive world of having to qualify or be ready for certain competitions, or if it's reflective of our general Western society mindset of, "I want it, I paid for it, I should have it," with little to no regard to what the horse is experiencing.

Whatever the case, the reality is the urgency of the human "accomplishing" something has caused in modern day horses a complete falling apart mentally, emotionally, and physically in an unprecedented way. The level or percentage of dysfunctional horses that I meet versus those that have had experiences with humans over the years and still seem to have retained a sense of horse-ness, is horribly imbalanced.
I find this urgency arises when someone purchases a new horse and is excited to "hurry up and do" with the new horse, but frequently ignores that just because the horse has had experience prior, does not mean that they do not have to put in the time and effort to build and establish a partnership between the new horse and themselves.

Many times this happens with young horses, newly started... with humans using the equine's acceptance of a rider as a go ahead to now do the "fun stuff" without either A.) Understanding how the horse was started, B.) Recognizing how LONG it takes horses to mentally and emotionally mature, C.) How LONG it takes to build a solid foundation after the horse accepts riders, and D.) No consideration of how quickly they can teach a horse to become defensive and fearful without anything "big" or dramatic occuring.

Some of the "urgent" human questions I get asked,

"How long will this take?"

"When will my horse be ready?"

"Why do I have to do revisit the basics if I've done more in the past ?" seem to based on an ideology that the horse is there to serve the human. This perspective has no consideration of what the horse is mentally and emotionally experiencing during the human interaction. It creates a disconnect irrelevant of how many hundreds of thousands of dollars of training is put into the horse.

There is a very clear "fork in the road" between those who choose to acknowledge and consider the horse and want to learn with him and build a partnership together, versus those that demand that he complies within the specific or designated time frame that they see fit, irrelevant of the horse's feedback and communication. And in the latter often when the horse doesn't comply, he is either discarded, or assaulted with severe "training" practices, a flurry of drugs, and harsh equipment to "make" him comply.

All of the dangerous and unwanted behaviors that I see in so many human-experienced horses, reflect what they have learned from being around the human.

The horse being "randomly resistant" one day is not a fluke. The well trained horse who suddenly quits moving forward. The horse trying to "wreck" the trail ride because they have been jigging for five miles. The horse who is "great" in the show arena but stands tied to the trailer "obnoxiously" pawing and screaming nonstop for hours. The "annoying to catch" but "fine" when you ride horse.

The next time you feel frustrated with your horse as to why he isn't complying "now," stop and assess yourself; consider how much responsibility do you take in your own education in understanding equine behavior? Doesn't matter what "other" stuff you want to do, if you don't have a fundamental understanding how the horse' mind and emotions affect his physical behaviors- it is like worrying about a car's paint job, while not dealing with its siezed up engine.

Ask yourself how many times have you ignored all of the subtle ways in which your horse was communicating that he was having a problem and you either reprimanded him, judged him, critiqued him, made up a human story as to "why" he was acting that way, or tried to contain him without ever searching for and addressing the route cause(s)?

If that is the path you chose, you cannot be upset when the unwanted behavior evolves into dangerous or disruptive behavior that don't comply with your "timeframe."

Every interaction with the horse humans have a choice; to either hurry up and make "it" happen versus addressing the horse in a way to that has value to him, building his trust, try, willingness, and retaining his curiosity. Then go enjoy the trail ride, competition, etc. with your mentally available, adaptable, and reasonable behaviors.