Anticipation in the Human when working with the Horse 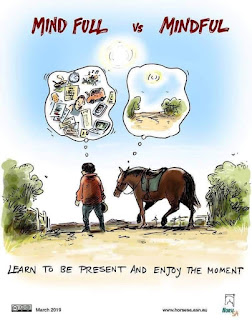 One of the greatest challenges humans have is the anticipation of "what will happen" when with their horse. There is a fine line of being aware of your surroundings, and things that are occurring at the moment, but to also not fixate on these and the potential outcome. So I suggest to folks to notice their own thought patterns. Whether it is occurring before they are with their horse or in a moment with the equine, to learn to notice when their mind gets "stuck on a thought." The first question is, "Why are they stuck on the thought?" I find this happens because folks tend to be reacting- or waiting to- in a moment, rather than offering proactive information to the horse.
Let's say the horse has a history of rushing out the gate. This can cause stress to the human if they are concerned about their safety, how the horse may move as he passes through the gate, and his behavior afterward, such as diving for the grass on the other side. The increased anticipation in the human, the more passive and contained they tend to behave around their horse. Such as not wanting to interfere too much with what the horse is offering, in order to not create a bigger reaction in the horse. So the more quiet or sneaking around the horse the human offers, the less specificity they have in regards to what they do want from the horse. This quickly creates an unwanted vicious cycle of defensiveness in the human and the horse.
So instead of thinking of the gate (or any other scenario) as the "task", I suggest changing the focus to addressing if the horse can be directed to look somewhere specific first, without movement. Then when his brain is directable, asking a step or two towards the direction he is looking, then a pause or halt for a mental check-in with the person. Then the ability to ask for perhaps a soft step back or forward, assessing his response to the physical pressure of following the feel of the lead rope or yielding to it, then another pause. Then look in a new direction, a few steps, etc.
This is not about a specific order of doing things, rather it offers the human a checklist assessment of where the horse's brain is, how his energy is, and his willingness to adapt what he is offering.
With these tools when communicating with the horse, the gate can become a Conversation. Such as asking the horse to pause while opening the gate, then looking away from the opening, moving away softly, then looking towards the open gate. If there is a concern, helping redirect his focus on something opposite the gate until he no longer anticipates it. Then perhaps assessing taking a step or two towards it, and noticing if there is a rush in the horse's movement or assumption that he will go out it, then drawing the thought away from the gate, offering a pause until he mentally digests and perhaps sighs, chews, blows his nose and physically softens. Then heading back towards the gate and noticing for an availability to move slowly, and if the horse is "asking" the human what they'd like, rather than "telling" them by getting heavy on the lead rope and pulling them towards the gate.
None of this actually about the gate itself. The gate just happens to be an opportunity for assessment and feedback from the horse, is a place to refine the tools in communication with the horse, and can be a great Conversation starter for whatever else may be asked of the horse further along in the session.
This is not to create a "pattern" of going out the gate either. If the horse is thoughtful and available from the start, then there is no need to "practice" not going out. But I find many "regular" interactions with the horse have unclear communication because there is not enough value put to having a quality interaction when presenting a familiar, seemingly basic scenario with the horse.
By prioritizing getting his mind from the start of going out the gate, affects the quality of leading him to the grooming area, the quietness of tacking, etc. It has a positive trickle-down effect. It also allows the human to feel empowered to see recognize where the horse's brain and emotions are, ask for a change in them if necessary so that the horse is directable and willing, and then by the time the gate or anything else is presented, the person feels like they are in the "driver's seat" rather than being a "passenger" to whatever the horse offers. This increases the human's confidence that they can proactively influence what is about to happen, rather than defensively react and attempt to contain the horse. And this is what allows the person to not fixate or worry about the "What if .scenarios..." with the horse.
Posted by SamanthaHarvey at Thursday, June 04, 2020