The Crazy Horse- Is it really the horse, or the human? 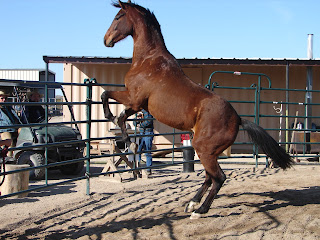 I see a lot of animals labeled the "crazy horse." Are there some horses that due to human mishandling have reached such an extreme place mentally and emotionally that they would be unsuitable for the average horse handling skills the general equine community has? Yes.

But then there's the "rest" of the labeled crazy horses. The ones that are overly dramatic in their reactions, the ones that seem to go from 0 to 60 in their behaviors. The ones that seem "fine" until they aren't. Are they too far "gone" also? I often find they are horses with human problems, rather than humans with problem horses.
I was recently reminded of two stories. One I experienced first hand and one I was told.

The first was from elementary school. I was lucky enough to have had a teacher way ahead in the unofficial psychology department of working with young children. We had a boy in my class. He came from a rough background, his grandparents were raising him, and his last name had a bad reputation. He was brilliant. He'd be done with class assignments in 1/4 of the time it took the rest of us. Things worked in his mind in ways that the rest of us couldn't fathom. He had so much energy. He couldn't sit still. His interactions with the other students were inconsistent- some days he'd get along and other days everything he did was irritating. Our teacher had a piano in the classroom, not a normal item at the time. Sometimes the teacher would play for us. But pretty near the beginning of the year, he realized that the troubled student had a knack for music. So he gave him sheet music to learn. Let him practice after school, unknown to the rest of us. And one day, as the boy was amped and frustrated, waiting for us slow students to finish, the teacher asked the boy to play the piano for us while we finished our work. But he hadn't brought the sheet music. Without hesitation, the boy sat down and begin playing from memory, The Phantom of the Opera. I happened to have been exposed to that music prior, but most kids didn't have a clue. And the boy didn't just play the notes, he played from the heart. Every raw emotion he was experiencing was spewing forth as his fingers graced the keys. The class was shocked. To have a boy who seemed to create such destruction plays something of such beauty and emotion. There was a communal shift that day, an unspoken moment where the rest of us realized that for all of the "ugly" things we'd seen, given a direction to funnel it, that resistance, defiance, anger, could morph into an emotionally beautiful experience. We never saw or treated the boy the same way again. Without being asked, we were able to find patience with his outbursts, forgiveness for moments when he'd disrupt and in turn, the dramatics of his antics diminished. By the end of the year, you'd never know he'd been "the difficult" student. That lesson stayed with me, it was probably one of the most important ones I'd ever learn in school. Treating the troubled person with humanity, support, and guidance, and showing that his pleas for help were heard, helped him change his choices and behaviors.

The second story I'd read about. It was a kid in school who would tap. Tap on everything, with anything, to the point of driving everyone nuts. He wouldn't even realize he was tapping. He was told to stop, punished, kicked out of school. Tried sitting on his hands. It was an extreme behavior and the more they tried to make him stop, the more he inadvertently tapped. He became insecure, withdrawn, and defensive because he was also told to stop, critiqued, and made fun of. He started a new year of school and the teacher experienced a few days of the tapping. One day asked him to stay after the class. The boy was fearful he was going to be kicked out of school. When he went to see the teacher, the instructor pulled out a pair of drum sticks. He asked the boy if he'd ever played. Shocked, the boy said no. The teacher suggested he learn how to play. And the boy did. He learned, he practiced and he had an outlet. He went on to become a world-famous drummer.

I know these are both about children and music, but my point is, just as with the horse, he only knows so many ways of "asking" unintentionally for support and guidance from the human. Most people tend to stay fixated on attempting to contain the unwanted behavior, rather than addressing the root cause, helping the horse learn how to work through, let go of, and find a "quiet" place mentally and emotionally. When what the horse is experiencing on the inside becomes calm and feeling "safe"- the physical behavior reflects this with reasonable, soft movement. 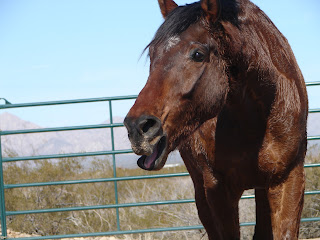 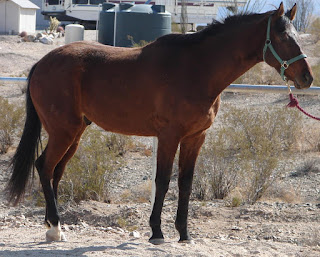 So sometimes it takes thinking "outside the box," for the human to search for how best to help the individual horse, rather than judging the horse for not complying. What the horse is displaying in his behavior is honest, whether or not the human thinks the horse should behave that way. So rather than critique and contain the horse, to have success, to re-educate the "crazy" horse, it takes time, searching, trial and error, allowing the horse to emotionally purge his years of containment, and ongoing support from the human to help the horse re-learn how to handle himself in a way that isn't filtered with defensiveness and reactivity.

Posted by SamanthaHarvey at Thursday, June 11, 2020