Someone in this group recently shared the following comment to my starting vs breaking the horse post: "This really resonates with me. Today I tried a new trainer, something away from my usual showjumping. A ‘natural horseman’ trained in XXXX. I felt my horse was being bombarded with stressful pressures resulting in With him bolting in the arena as his only means of ‘release’, then when cornered, my horse smashed through the gate to escape. I have been informed my horse has no respect for me. I feel so lost." 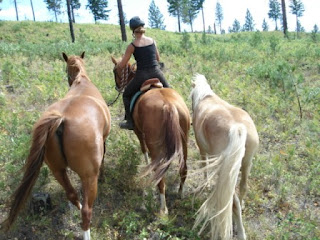 So I thought I'd share my thoughts... Unfortunately, this isn't unique... I meet a lot of folks who have tried a "trained" professional who has learned through a specific "program." As I said in Wednesday's #chitchat video in the FB GROUP, sometimes one program may work for a horse, but other horses may need things to be adapted in how and what is presented. But because the "trainer" was only taught how to look for physical responses to specific tasks and had a pre-set agenda to follow "step 1, 2, & 3," they lose perspective or literally are unable to recognize what is currently influencing the horse's thoughts, not believing his concerns, and bully him- even if not done aggressively, to try to get him to comply with the task accomplishment focus. So they continuously are increasing the pressure- whether physically or spatially- and then get upset or critical when the horse becomes overwhelmed and physically explodes. What other choice did he have?
One of the alternative perspectives I share is "thought, then movement," versus the traditional "move the horse's feet to get his mind," and continuously "moving" the horse to get him to comply. I'm 5'2" and there's no way I can "make" any animal do anything. So when I'm talking about influencing a horse's thought first, then his movement, this is also for the safety of both the human and the horse. If the horse's brain is already fleeing, defensive, concerned, or fearful, and I ask MORE movement of him, what will his response look like? It is like adding fuel to an already burning fire.
Another thing folks often following a "set" program do not allow is time for the horse to think through a scenario, nor do they acknowledge when the horse tries even if in the slightest manner. Because someone has been taught "it" has to "look" like "x,y & z," anything less than accomplishing x, y & z is not acknowledged by the human. This contributes to the horse "trying" less and less for the human, and so earlier sooner in the interaction, he is looking for ways to avoid any interaction. I believe our horsemanship and the quality of it comes back to the human factor. It is far less "challenging" to go through the motions than to become aware of our own behavior patterns, thoughts, intentions, slowing down and being mentally present, aware of our energy, anticipation, and communication. But financially, that's a "hard sales pitch," to sell to folks. It isn't a quick fix solution that you can neatly wrap up and sell in a society that has learned to expect instant gratification solutions, including with their horses.
Posted by SamanthaHarvey at Thursday, June 25, 2020