Breaking a horse vs. Starting One 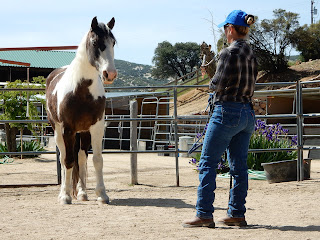 I recently was working a horse and a client had brought their son-in-law, who had been raised breaking horses. It was interesting in the conversation I was having in explaining the difference in breaking a horse and created a constant containment. Besides the obviously physically aggressive manner in doing things, I was explaining when "starting" a horse how it would affect everything that would follow in the interaction with the horse.
One of the crucial reasons is for all the unexpected moments that would and could arise when interacting with the horse. If he was always starting in a place of defensiveness, having a feeling of having to "protect" himself, and literally looking for options to avoid a scenario, how much reasonableness would the horse have to "hear" and accept the human's input, direction, and support?
He wouldn't. The first opportunity he had to leave, he'd take, which often leaves the person in a bad situation.
But if the horse's starting place is offering a willingness to work with the human, their response in times of chaos, stress, or the unexpected, becomes reasonable, something the person can help the horse work through rather than him avoiding and fleeing.
I don't want to have a concern if I drop the lead rope, if something surprises the horse, or if I ask something new of him. I want to have an animal that is willing to mentally and literally address and search for what is being asked of him. One that even if not confident in the new situation, can try to adapt and let go of his initial concerns. Then I have something to work with.
It decreases the dramatic moments, danger and at the same time builds a partnership based on specific, two-way communication and support.
But this isn't the quick-fix solution. It isn't using a "training program" that suits all. Each horse has to be considered as an individual, and the approach that will help him best may vary from the next horse.
I believe if we are going to ask and present completely unnatural things of the horse, then it is the human's responsibility to search, use trial and error, allow time for learning and offer non-critical support to help the horse learn how to learn. To guide him and teach him how to drain tension, to focus on what is being presented, to be soft to following a feel, and not carrying defensiveness towards spatial or physical pressure.
Posted by SamanthaHarvey at Monday, June 22, 2020

Email ThisBlogThis!Share to TwitterShare to FacebookShare to Pinterest
Labels: reeducating a horse