Commonality- Various Scenarios and Quality Conversations with the Horse 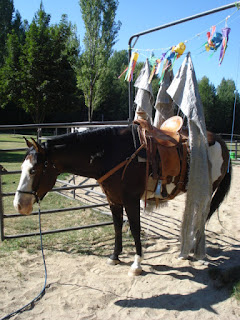 What does the mounting block, going out a gate, loading into a horse trailer, crossing over a tarp, or passing through a stream have in common? None of them are about the actual task. Instead, it is about the commonality of the Conversation and having the tools to communicate with the horse clearly the specifics of where you want their thought, focus, and then movement. Each allows for an opportunity to help the horse learn how to think their way through a scenario, rather than just physically comply.
And the feedback "afterward"- once the rider is in the saddle if the horse immediately moves forward, if the horse rushes after passing through the gate, if the horse unloads from the trailer in a hurry, if the horse quickens and shortens his steps across the tarp, or if the horse lunges away from the stream, is feedback as to how he felt about the scenario presented.
But most people tend to fixate on the task rather than addressing the preparation of the horse mentally and physically before presenting a scenario. By not checking-in with where the horse's thought is or if he is directable- meaning you can offer a different thought than what he perhaps initially offered, and if you do not have the ability to influence his energy or ask him to mentally and physically pause, then you haven't prepared him for the scenario. This creates a "Let's see what happens," challenge to the horse getting "it" right, rather than offering him support to work through whatever setting is being presented.
Even if a horse begins unsure or is in a new situation, if he has support, it can be a confidence-building, learning opportunity. But if you don't have the foundation of clear communication, then the same scenario can quickly escalate into a stressful and overwhelming event for both the horse and human that can lead to defensiveness in a future learning situation.
Imagine each thing you ask of your horse is one small link in a "chain" of events. If you are hopeful or "waiting" to see what the horse will do, you are leaving it up to him to take over and decide how he will physically respond. Then if you intervene after the fact, it creates a critical interaction causing defensiveness in the horse and diminishes his willingness to try in the future. So if instead of focusing on task accomplishment you focus on Quality Conversations, the tasks you do ask of your horse become non-events and contribute to a solid, trusting partnership.
Posted by SamanthaHarvey at Monday, June 08, 2020